Are You Swimming in the Pond? A Case for Chiropractic Care. 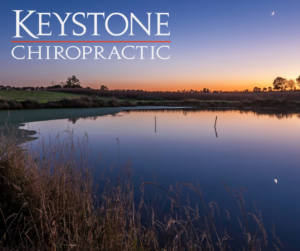 You’re probably wondering: “What does swimming in the pond have to do with chiropractic care?”  Let me share a story!

I love swimming in the pond at my parents house. When I was a kid, it seems like I was in the pond more than I was out during the summer (and sometimes even when it was cooler.

Now that I’m a little older, I still find it refreshing to hop in the water and cool off after my workout. The pond has a nice sandy beach with a slow slope so kids don’t drop into the deep parts immediately, but there are still some deep parts for bass fishing and for jumping off the pier.  Next to the pier is a set of concrete steps that my dad and uncle formed years ago.  Knowing this pond like I do, I know the steps are always slippery from pond scum and algae, so I usually opt to wade in down the beach.  But when I’m getting out, I usually opt for the steps so that I don’t get sand all over my feet.

I don’t mind the pond scum, and the steps normally aren’t too slippery to walk up. But what gets me EVERY TIME is the rocks that seem to find their way on to the steps. The pond has rip rock around its edges to keep it from expanding unnecessarily (and to keep the muskrats out). And, of course, who doesn’t like to throw rocks into the pond? Stepping on a rock while coming out of the pond is annoying, but stepping on a rock while walking down the steps could be disastrous!!

Imagine that you are walking down the steps, knowing full well that they’re covered in slippery pond scum. You would be prepared for that, and would be careful.  But you can’t see very deep into the pond, and usually by the third or fourth step down, the surface of the steps aren’t visible. Stepping on a sharp or irregular rock instead of the flat surface would cause most people to jerk and fall. If you had great reflexes, you might dive forward, but it’s likely that you would fall backward, landing on the concrete stairs, or possibly even hitting your head on the pier.

This scenario parallels what happens when there are neuro-structural shifts in your spine, that haven’t yet presented symptoms.  A shift at your atlas might cause your spine to be twisted, which draws one hip up short; you may not even realize it until you lift something wrong, and you wind up with low back pain.  The potential for a problem was there and waiting, but you didn’t know it because it wasn’t causing you any pain, and was not visible.

Taking advantage of chiropractic care on a regular basis keeps your body working well. Most people make sure to change the oil in their cars to keep up regular maintenance, but many people let their bodies break down before anything is done about. Sometimes it seems that the traditional medical system also waits for things to break before paying a great deal of attention to underlying issues.

I once heard a medical doctor speak about how left the traditional medical system because he couldn’t perform proper testing on diabetic patients until they had an organ failure! The comorbidities with diabetes are awful!  It doesn’t make sense to not test for things that could impact someone’s longevity or quality of life. Who wants to find out that you have had diabetes for 10 years but didn’t know it. Or worse, that your foot needs to be amputated as a result?  With a history of diabetes and autoimmune disorders in my family, I certainly wouldn’t want to be in that situation!

When it comes to our health, I firmly believe that we should be correcting the cause of the problem before there’s a crisis.  Getting chiropractic care, and getting your head on straight, is a force-multiplier for cleaning up so much. Proper chiropractic care improves your body’s ability to heal. I could go on for days.

With the rocks on the steps, I spent five minutes moving the rocks back off the steps onto the shore to prevent issues that might arise for other people! Risk management isn’t fun, but it sure does pay dividends on the back end.  Just one more example of better being safe than sorry!

As an engineer, Dr. Schurger looks at the whole body as a system to determine what is best for each patient. Custom spinal imaging is performed for each patient in order to create a custom correction. Dr. Schurger has transformed himself through the ketogenic diet and offers nutritional advice to help patients improve their overall health (weight loss being a side effect). His practice, Keystone Chiropractic is at 450 S. Durkin Drive, Ste. B, Springfield. Call 217-698-7900 to setup a complementary consultation to see if he can help you!