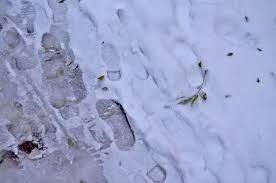 With the weather the way it is at this time of year, we often see patients who have slipped on the ice and fallen.  One minute it’s raining, and the next parking lots and driveways are ice rinks. But what if you just slip and manage to catch yourself?  Can a simple slip cause structural shifts that may need to be addressed?  The short answer is yes.  The esteemed B.J. Palmer wrote the following in 1944: .

A slip on the snowy sidewalk in winter is a small thing.  It happens to millions.

A fall from a ladder in the summer is a small thing.  It also happens to millions.

The slip or fall produces a subluxation.  The subluxation is a small thing.

The subluxation produces pressure on a nerve.  That pressure is a small thing.

That decreased flowing produces a diseased body and brain.  That is a big thing to that man(woman/child).

Multiply that sick man(woman/child)  by a thousand, and you control the physical and mental welfare of a city.

Multiply that man (woman/child)  by one hundred thirty million, and you forecast and can prophesy the physical and mental status of a nation.

So the slip or fall, the subluxation, pressure, flow of mental images and disease are big enough to control the thoughts and actions of a nation.

This man (woman) gives an adjustment.  The adjustment is a small thing.

The adjustment replaces the subluxation.  That is a small thing.

The adjusted subluxation releases pressure upon nerves.  That is a small thing.

The released pressure restores health to a man (woman/child).  This is a big thing to that man (woman or child).

Multiply that well man (woman/child) by a thousand, and you step up the physical and mental welfare of a city.

Multiply that well man (woman or child) by a million, and you increase the efficiency of a state.

Multiply that well man (woman/child) by a hundred thirty million, and you have produced a healthy, wealthy, and better race for posterity.

So, the adjustment of the subluxation to release pressure upon nerves, to restore mental impulse flow, to restore health, is big enough to rebuild the thoughts and actions of the world.

The idea that knows the cause, that can correct the cause of disease, is one of the biggest ideas known.  Without it, nations fall; with it, nations rise.

This idea is the biggest I know of.

The bottom line is that that each day, small things can happen that cause us to mis-align…ever so slightly.  It can be a slip without a fall, a full fall, sitting at an awkward angle while you’re talking to a group of people, stopping suddenly in traffic.  All of these things can cause a slight shift, which could cause pain, but can also cause other issues within your nervous system, which may translate into a myriad of seemingly unrelated symptoms.

As an engineer, Dr. Schurger looks at the whole body as a system to determine what is best for each patient. Custom spinal imaging is performed for each patient in order to create a custom correction. Dr. Schurger has transformed himself through the ketogenic diet and offers nutritional advice to help patients improve their overall health (weight loss being a side effect). His practice, Keystone Chiropractic is at 450 S. Durkin Drive, Ste. B, Springfield. Call 217-698-7900 to setup a complementary consultation to see if he can help you!